Skip to Content
Home / Design / Old House Renovation: Before and After

Before I started this design blog, I was blogging under the publishing umbrella, Glam Media, and wrote several popular articles for what is now Tasty.com and other well known blogs. While I no longer work for Glam, my past as a career blogger, afforded me the opportunity to buy my first house: a fixer upper!

Two years after purchasing my fixer upper home, Glam Media filed bankruptcy, and I lost my main source of revenue. What was once a company valued at $1 Billion, quickly shut its doors, leaving many bloggers in the dust.

I ended up having to fire my contractors and do everything myself, from drywall, to floor repairs, to painting, and trimwork. Channeling my inner Chip and Joanna Gaines, I busted through plaster and lathe like it was nobody’s business. While the process wasn’t nearly as easy (and quick) as it looks on TV, I learned a ton about home repair and design challenges thanks to This Old House and of course, my favorite HGTV show, Fixer Upper.

While there is still work that remains unfinished, I did complete a majority of renovations. So, without further ado, here is quick tour of my first home renovation, sans trim.

Starting with the kitche, this space is probably my favorite part of the whole house. We transformed a very narrow, enclosed galley kitchen into a larger, open concept space with a full-sized island and bright new cabinets.

The living room is actually a combined living/dining space but since the kitchen island is so large (9×5) we don’t use the dining area, and instead eat at the island. No dining room = more play space for kiddos. We tore down the wall that separated the kitchen from the living room to open up the space and brought back the original hardwood floors hidden underneath the carpet. A couple of built in shelves were added for more storage because this house came with ZERO storage space.

Sometime in the 50s, the house was a duplex, and what is now the baby room, was originally an upstairs living room. We put up some walls, moved the hallway, replacing it with two full-sized closets, and added a doorway.

I don’t have any pictures of this bathroom in its original form, but it used to be an upstairs kitchen. Because of that, I had troubles envisioning a full-sized bathroom until it was completely gutted. Since it used to be a kitchen, it’s large enough to host a party, and perfect size for a separate bathtub and shower which was installed so that the twins could bathe at the same time while they were little, and separately as they got older.

When I originally bought this house, there were three functional bedrooms. Since we turned the upstairs living into a bedroom, there are now 4 including the master: three upstairs, and one downstairs.

Sign up for weekly DIYs, Recipes, and Design Inspo straight to your inbox!

Before and After: Vintage Retail Design Renovation 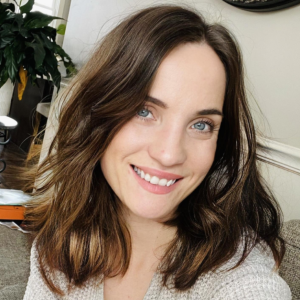 If you have recently stumbled across my blog, welcome! My name is Jessica and I’m the blogger behind Design Sprinkles.
I absolutely love designing and creating. With this blog, I hope to spark joy and creativity in others as well!